Yemeni Coffee: What It Is, History and Brewing Tips

Coffee beans have existed for centuries. Since international trade started, coffee has remained as one of the main commodities traded because of its numerous benefits.

One of its benefits that we all know is its ability to keep us alert, increase our concentration and focus.

When we think of the origin and history of coffee, Yemen is not a country that comes to mind. However, coffee has a major role in the culture of Yemen. The coffee plant is said to have originated in Ethiopia, but the coffee beverage as we know it today started in Yemen.

That is because the first time coffee was used as a beverage was in 1450 in Western Yemen by a population of Yemen mystical Sufi monks. They used the beverage to help them stay awake and alert during their night meditations.

Over the years, Yemen people started importing more coffee from Ethiopia and started planting them. Later, the coffee drinking culture started spreading around the world, and Yemen increased its production of coffee.

During the 17th and 18th centuries, the majority of the Yemen population started practicing coffee farming because of the boom in consumption. During the early 1700s, almost the whole of Yemen’s income came from coffee exports.

Also, a big percentage of the world’s coffee supply was from Yemen. When they started using their Red Sea port, Mokha, the coffee beans that were traded from that port gained the name Mocha. These days, Mocha is used to refer to coffee with chocolate addition.

They mainly used the Mokha port to trade with the Indonesian people. The country’s unique and ideal terrain, environment, and climate made it possible for them to produce the best coffee beans in the world.

After Indonesians planted coffee in Java, Yemen lost its prominence in the coffee industry, but a huge percentage of the world’s coffee still comes from there. 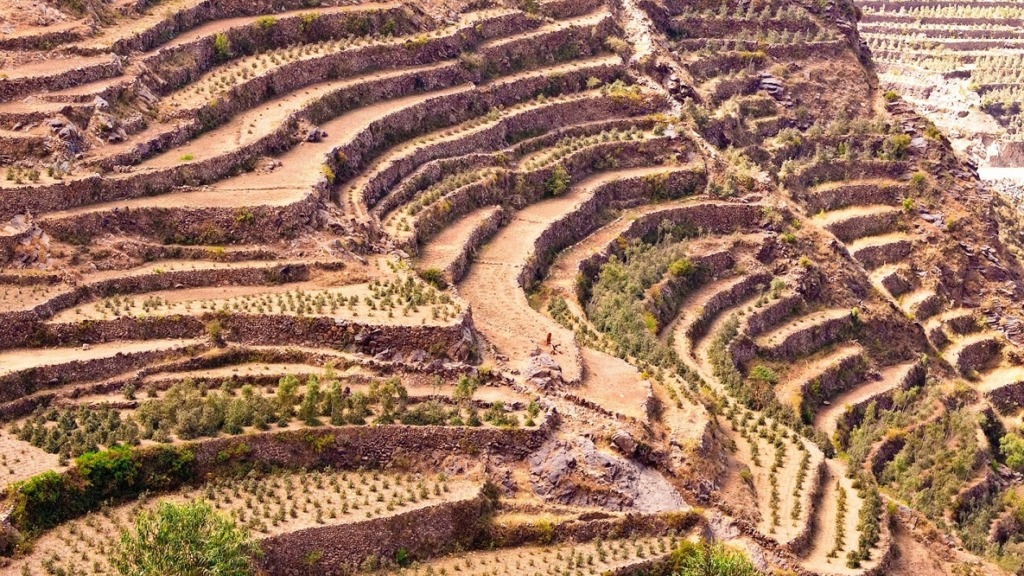 Until today, Yemen has managed to maintain and better the farming and working processes they used when they were still the main coffee producers. The coffee is planted on small family fields and grows without the addition of any chemicals.

After some time, they start producing the fruits, known as cherries. Once they ripen and become red, they are handpicked, and through a floating process, the farmers separate the good and the bad cherries.

The good cherries are then sun-dried, with the beans still inside, a process that can take between 16 and 22 days. They are spread either on raised beds or the roofs of the farmer’s houses. After the cherries are dried, it is easier for the farmers to separate the beans from the hard husks.

After the husks are removed, what is left is a rough irregular bean, which is the trademark of Yemen coffee beans. The beans are then ground with millstones that are turned mostly by camels or donkeys.

Sometimes, small gasoline engines are used to turn the mills, but even then, the output comes in small batches. Only the richly flavored and more aged coffee beans are exported because they have higher prices.

Most of Yemen’s coffee is grown in high altitudes of about 1,800- 2,700 meters above sea level. That contributes to the small size of the coffee beans but makes them more compact.

The harvesting and drying processes of Yemen’s coffee are helped by the high temperatures plus drought-like conditions in the countries.

The natural drying process and the fact that no chemicals are used during the growing of the plants make the coffee beans get their distinct aroma and rich flavor.

Yemen coffee is said to have a winey and spiced aroma when served by itself, with faint traces of chocolate. Some love to describe it as a combination of chocolate, cinnamon, and dates.

Since only around 4% of Yemen has the conditions to grow coffee, the small production has contributed to many counterfeit Yemen coffee brands in the market.

That scarcity, the uniqueness in taste and smell, and the method of production of Yemen coffee make it very expensive.

There are different types of Yemeni coffee, each grown in different places and each having its unique characteristics.

This type of coffee is grown at altitudes of 3,000- 4,500 meters above sea level. It is grown on the Haraz Region Mountains, west of Sana’a. It is one of the most known types of Yemeni coffee and is the most used globally.

It is perfect for making cold or filter coffee. It exhibits spicy and nutty tastes, with smells of grapes, citric, and spices. Harazi coffee is the highest rated among all other Yemeni coffee types. It also has acetic and vibrant citric, phosphoric acidity.

This is also grown in the Haraz region, west of Sana’a, at altitudes of over 3,000 meters above sea level. Peaberry accounts for 5% of all the Yemeni coffee produced, and its beans are round rather than flat.

It exhibits nutty, spicy, and chocolate tastes, with nutty, spicy, citric, and dark chocolate smells. It has a silky feel in the mouth and has sweet and complex citric, malic, and acetic acidity.

This is grown in the Bani Ismail district, at altitudes of 2,000- 2,900 meters above sea level. It is characterized by its smaller, lighter beans which have a round shape. The lightness of its beans makes it perfect for making espresso coffee.

It smells like chocolate, lemon, and hazelnut, with a fruity and rooibos taste.

This is grown in the Bani Mattar Mountains, at altitudes of 2,500- 3,000 meters above sea level. Even though it is a delicate coffee type, it has a strong, unique, complex winey, spicy, citric, and honeyed smell, which makes it easily recognizable.

It is the most acidic and complex Yemeni coffee, with the strongest aroma. It has a winey and spicy taste, with a juicy feel in the mouth.

Utmai coffee is grown on the mountains of Automah natural reserve at altitudes of 1,700- 2,300 meters above sea level. It is slightly stronger than the Harazi and Mattari coffees. It has more rounded beans with an excellent body.

It is also acidy and winy but less assertive. It has citric, nutty, and taffy smells, with peanut and hazelnut tastes.

Hafashi coffee is grown in the mountains around the Al-Mahwit district. It is considered the most elegant and exquisite Yemeni coffee and is characterized by the combination of surrounding fruit trees and species.

It has honeyed, nutty, fruity, citrus, and spicy smells, with spicy and fruity tastes.

With the coffee drinking practice being global, there are more and more styles of brewing coffee almost every day. To find the one that fits you best, you have to try several recipes.

However, when it comes to preparing Yemen coffee, the best style is the traditional one, and it stands unbeaten.

The first step is grinding your coffee beans in the same way you would when making espresso. Ensure that the final product is a fine powder.

Add six teaspoons of the ground coffee into your pot, 4-6 teaspoons of sugar (depending on how sweet you want it to be), and about one cup of water. If you have ginger, add two teaspoons.

Place the mixture on the stove and bring it to a boil. Ensure that you consistently stir to prevent clumps from forming.

Once it boils, remove it from the fire, let the mixture come to a rest, and then put it back on the fire.

Let the mixture boil again while still stirring, and remove from heat. Repeat that until the coffee gains the consistency of steamed milk.

Boiling the coffee mixture several times brings out its natural taste in a flavorful and bold manner. Yemeni coffee is served in small cups, resembling those that serve espresso, which is around 2 ounces in size.

You can enjoy your Yemeni coffee with a snack of your choice. There have been different recipes for making Yemen coffee, where people add different spices like cardamom and cinnamon. Some people also add milk to the coffee to give it a creamier feel.

All those go down to the person’s taste preference, but the basic recipe of making the coffee remains the same.

Also, in Dearborn, Michigan, there is a Yemeni-style coffee shop that sells Yemeni coffee that is directly imported from Yemen. The coffee is grown and harvested from a farm operated by the owner’s family.

Since there are a lot of counterfeit Yemeni coffee producers and distributors, you have to be careful about where you buy your coffee. Do your research a few weeks before making the purchase, especially if you are buying it online.

Ensure that the seller gives you proof of where and how they get their coffee. You could also ask for a reference from someone who has bought the coffee before.

A Complete Guide To Kunafa

Halal Turkey is the Best Turkey! Learn Why – Plus 3 Recipes

Origins of Bulgar Wheat Plus Recipes